A STUDY OF ERRORS IN THE THIRD SINGULAR PRONOUNS OF SIMPLE PRESENT TENSE BY USING INTERLANGUAGE ANALYSIS AS AN APPROACH. A CASE STUDY

The purpose of this study is to analyze factors contributing to errors made in learning English as a target language (TL). Employing a case study research, the participant was interviewed for approximately 30 minutes about daily activities and experiences in learning English. This research focuses in analysing the participant‟s use of third singular pronoun in simple present tense. The findings revealed that errors made by TL learners are mainly influenced by some factors related to their TL‟s and native language‟s (NL) knowledge, systems and rules. These factors are coexisted and interconnected in TL learners‟ minds. This is against Robert Lado‟s argument which mentioned that learner made errors in TL learning because of the interference from NL. The study provides pedagogical implications that TL teachers should perceive errors made by the learners as a sign of language learning and development; therefore they should not be discouraged to learn. Also, TL teachers should be aware of their very important roles to help, to guide and to lead the learners‟ progress in learning the TL. The future subsequent studies should consider of involving more sample size over a longer period of time as to obtain to a more generalized finding.

Target language (TL) learning is often challenging for learners. This is because of the vast


differences between their native language and the TL in terms of rules, forms and knowledge. Some learners find learning fun while

others find it frustrating. Learners exert considerable effort to become competent speakers or even to emulate native speakers. For example, they strive for perfect pronunciation.

In their efforts to learn the TL, learners usually make errors. Some teachers strongly believe making mistakes is an important part of the learning process and that it enables learners to improve their TL skills. Other teachers perceive errors negatively as obstacles in learning, and therefore believe errors need to be eliminated. These teachers have limited tolerance with learners who make errors. Other teachers might ignore errors, or they simply do not know how to address them.

Some theorists consider errors as a learning process. It demonstrates the mind‟s ability to adapt, transform and restructure NL and TL language systems to a new language system. These theorists also believe that errors are reflections of

the learner‟s efforts to comprehend the TL systems and knowledge. In other words, berita terkini indonesia are reflections of a new language system being constructed. This new system combines elements of both the NL and the TL. Therefore, it is strongly argued that TL learners make errors as efforts to construct a new language system which is somehow different from the system of NL and TL and not interference of NL to TL. This paper is intended to analyze factors contributing to errors made in learning English as a foreign language. 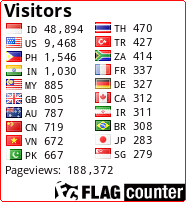